The art essay of the month

In the Book of Exodus, we encounter a curious paradox: God speaks to Moses face to face, and yet hides his face from his servant. The Lord used to speak to Moses face to face, as a person speaks to a friend (Ex 33:11), but when Moses pleads to see the Lord’s glory, he is rebuffed: You cannot see my face, for no one can see me and live (Ex 33:20). God makes himself known, but remains hidden.

Elsewhere in Scripture, a similar experience is memorably described: “Come,” says my heart, “seek his face”; your face, Lord, do I seek! Do not hide your face from me (Ps 27:8-9). A desire to see the Lord’s face burns within the Psalmist, but is not consumed. This desire is not reserved to the Psalmist, however. All are invited to share in this quest: Seek out the Lord and his might; constantly seek his face (Ps 105:4). Despite the delayed response to Moses’ plea, the Prophet Isaiah assures us that this longing will not ultimately be in vain: They will see the glory of the Lord, the splendor of our God (Is 35:2).

In the Incarnation, the glory of the Lord becomes visible: And the Word became flesh and made his dwelling among us, and we saw his glory, the glory as of the Father’s only Son, full of grace and truth (Jn 1:14). At the same time, the glory of the Lord somehow remains hidden: while Christ is the image of the invisible God (Col 1:15), he emptied himself, taking the form of a servant, being made in human likeness (Phil 2:7). Jesus’ divine glory was not usually apparent to those he encountered in his earthly ministry, but on the feast of the Transfiguration we celebrate the moment in which Christ “revealed his glory in the presence of chosen witnesses and filled with the greatest splendor that bodily form which he shares with all humanity” (Preface). The face of Jesus, which shone like the sun at the Transfiguration, gives us a glimpse of the glory we are called to share with God in heaven.

The face of Jesus was central to the devotional lives of medieval Christians. Beginning in the 13th century, depictions of the Holy Face began to appear in Books of Hours, popular prayer books often intended for a lay audience. Like Magnificat, Books of Hours provided both texts and images that helped Christians meditate on the mysteries of their faith and join their personal prayer to the liturgy of the Church. In this Book of Hours, produced in Bruges (within present-day Belgium) in the mid-15th century, the prolific illuminator Willem Vrelant depicts the Holy Face with a serene authority. Jesus calmly gazes towards the viewer, welcoming our loving gaze in return. Although hidden in the middle of this Book of Hours, the Holy Face does not attempt to hide itself once found, but invites us to dwell on its features.

In the 13th century, a document known as the Letter of Lentulus began to circulate in Latin translation, offering what purported to be a Roman official’s eyewitness description of the face of Jesus. Deeply rooted in Eastern iconography, this apocryphal letter in turn played a central role in shaping Western depictions of the Holy Face. According to Lentulus, Jesus had brown hair “flowing over his shoulders, having a parting at the middle of the head according to the fashion of the Nazareans; a brow smooth and very calm, with a face without wrinkle or any blemish, which a moderate red color makes beautiful; with the nose and mouth no fault at all can be found; having a full beard of the color of his hair, not long, but a little forked at the chin; having an expression simple and mature, the eyes grey, flashing, and clear.”

King of kings and Lord of lords

Vrelant’s painting in this Book of Hours corresponds closely to the Letter of Lentulus, depicting Christ with flowing brown hair and forked beard, ruddy but beautiful skin, and a serene yet flashing expression. Keeping with contemporary practice, Vrelant enhances the splendor of the image with a threefold floriated nimbus, the golden rays shining forth from a dark blue background and reminding the viewer that this human face is united with the divine. Around the face, a festive floral background reminds us that Christ is the firstborn of all creation, for in him were created all things in heaven and on earth (Col 1:15-16). Above his shoulders and in a band about his neck, Vrelant has inscribed the titles ascribed to Jesus in 1 Timothy 6:15 and Revelation 19:16: King of kings and Lord of lords. The Holy Face is fully human and yet gives us direct contact with the divine: For the Lord, your God, is the God of gods, the Lord of lords, the great God, mighty and awesome (Dt 10:17).

Below the face of Christ, a 14th-century hymn to the Holy Face is transcribed that proclaims the unity of the divine and the human: “Hail, holy face of our redeemer, in which the appearance of divine splendor shines forth.” As the hymn continues in the following pages, the Holy Face is proclaimed to be the glory of the world, capable of purging us of all our vices and eventually leading us to share in the beatific vision of God himself. After the hymn, the reader is invited to pray with the Psalmist: Let the light of your face shine on us, O Lord: you have given joy to my heart (Ps 4:7-8). This short devotional office to the Holy Face concludes with a prayer begging that we might come one day to see God face to face together with the saints in heaven. As beautiful as Vrelant’s image of the Holy Face may be, it is only a mirror through which we see indistinctly—but it gives us nonetheless an image of Jesus, the image of the invisible God.

Dominican friar of the Province of Saint Joseph and a professor of liturgy.
His doctoral studies focused on medieval liturgical and biblical manuscripts. 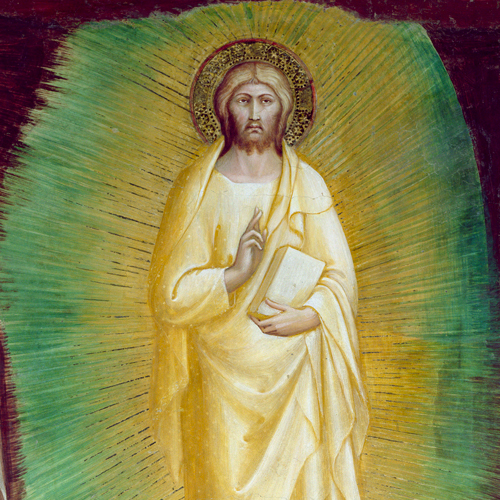