The art essay of the month

During a lifespan that crossed from the 4th to early 5th century, Saint Jerome was a priest, a monk, a pope’s secretary, a desert hermit, and head of a monastery in Bethlehem. But the Church remembers him in the canon of saints as a scholar and translator of the Bible who exemplified a holiness of life worthy of emulation. Widely known as one of the greatest of the Latin Fathers, Jerome commented on the Scriptures, weighed in on theological controversies, wrote hundreds of letters and homilies, and completed the herculean task of translating the Bible into Latin from both Greek and Hebrew. Known for his sharp tongue, intolerance of laxity, contemplations on death, and intellectual acumen, Jerome’s dedication to scholarship and profound love of Scripture affect the Christian’s experience of prayer to this day.

Jerome in his study

Though many artists have shown Jerome as the emaciated ascetic kneeling on rocks while living in a cave, Domenico Ghirlandaio painted him in a well-furnished study on the walls of the Florentine Church of Ognissanti in 1480. The initial stirrings of the Renaissance and its love of all things ancient had matured by the late 15th century, and Jerome held more than a pious interest to Renaissance thinkers. A contemporary of Saint Augustine of Hippo, Jerome fascinated Florentines for having acquired Christian knowledge and holiness in the early centuries of the Church while its feet were still dipped in classical learning. Accordingly, he is shown as a scholarly Doctor of the Church, as indicated by his dress in cardinalatial red with his cardinal’s hat on the shelf behind, even though in actuality this attire developed several centuries later.

Jerome’s small study shows a wealth of detail worthy of a scholar and translator: pens, ink, scissors, books, parchments, eyeglasses (also not yet invented in his time), and candles. Though Jerome shows a contemplative stillness, his active life is indicated as well: he holds a pen in his hand, translating Scripture into the Latin edition now known as the Vulgate. The two inkwells subtly indicate this work: both the black ink, for text, and red ink, for rubrics, have splashed against the wood of his writing desk from repeated use. He clutches a folded piece of paper in his left hand, a reference to his nearly 120 existing letters, which were particularly prized in the Renaissance for their breadth of topics and revelation of Jerome’s spiky personality. Jerome’s eyes reveal a depth of pathos, his mouth a hint of a smile, and forehead creases indicate a life of thoughtfulness and animation. The entire scene gives a combined sense of energy and weariness typical of a long life of dedicated labor.

Though Saint Jerome was an ascetic and a monk, the artistic conventions of the Renaissance show his study overflowing with objects on high shelves that give the viewer ideas to contemplate. Half-filled carafes on the upper right symbolize the perpetual virginity of the Virgin Mary, a theological position staunchly supported by Jerome in an influential treatise. A round wooden box is topped with fruit, in itself a small tableau concerning the mysteries of sin and salvation. The fruit calls to mind the poisonous apple of Adam and Eve’s fall in the Garden of Eden, the food of spiritual sickness and eternal damnation. By contrast, the round box below has been identified by scholars as a large pyx holding Eucharistic hosts, the food of salvation and the medicine of eternal life, an idea central to Jerome’s thought and writings as an answer to the sin of Adam. In a similar vein, the apothecary jar with Christ’s monogram—the IHS—likewise speaks of Christ as a spiritual remedy for fallen humanity.

In Jerome’s time, knowledge of Hebrew was not common in Christian circles, and he insisted upon translating the Old Testament from the Hebrew rather than the Greek translation known as the Septuagint. He consulted with Jewish scholars for both linguistic and interpretive help, often facing criticism from fellow Christians for doing so. Later centuries praised him for his intellectual rigor, and Ghirlandaio’s painting is filled not only with books, but also with pieces of text on scrolls and bits of paper pinned here and there, displaying the ancient languages Jerome mastered in order to translate the Scriptures. The study of inscriptions, known as epigraphy, not only interests modern art historians, but fascinated Renaissance humanists who cherished ancient languages and learning.

A small paper on the shelf above the saint’s hand reads in accurate Greek the phrase from Psalm 51: O God, have mercy on me according to your great pity. A scroll hanging from the shelf reads in partially legible Hebrew: I call out in my anguish; my lament is troubling me. These prayers of repentance and lamentation suit the monk who lived a life of penance in the desert. Yet they also reveal the saint who sought God’s merciful entrance into the life of man, exemplified by the Latin inscription in the architectural frieze above the painting: “Illuminate us, O radiant light; otherwise the whole world would be dark.” In one of his letters, Jerome explained that after some immoral living in his youth, pangs of conscience led him to wander the Roman catacombs, visiting the underground tombs of the martyrs and apostles. The darkness moved him to ponder the depths of hell and brought to his mind a saying of the ancient poet Virgil: “everywhere horror seizes the soul and the very silence is dreadful.” Saint Jerome’s entire life can be read as a response to this darkness. In his quest for understanding, he called the light of Christ into the world and shared it with others. And in his monumental work translating Scripture, he sacramentalized the divine voice, filling the silence with the Word of God.

Associate Professor and Executive Director of the Center for Beauty and Culture at Benedictine College in Atchison, Kan. 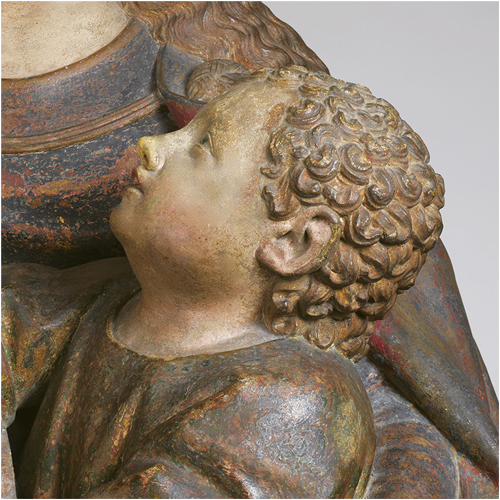 At the Christian academy I attended throughout elementary school, we had to memorize a lot of Bible verses. Our success was tracked by those classic, shiny stars stuck next to our name on a poster board in the classroom. So in addition to the intrinsic worthiness of the assignment we were motivated by an age-old incentive: peer pressure. Even so, it was a positive experience. And it goes without saying that we all knew John 3:16 and John 11:35—the shortest verse in the Bible—so every kid had at least two stars.

Indeed a lovely effect of simply praying with the Scriptures regularly (such as, if I may say, with the small glossy booklet you now hold in your hands) is that inspired turns of phrase and images gradually become lodged in our memory. These saving words then surface from time to time, giving nourishment, inviting our meditation, and providing inspiration or comfort in times of difficulty. Certain passages and verses may also come to mind when we hear or read other parts of the Bible, and we gain a deeper sense of the unity of divine revelation.

In my book, Psalm 137:1-6 is one of the most ­memorable passages of all. Here it is in a familiar translation: By the ­rivers of Babylon there we sat and wept, remembering Zion; on the poplars that grew there we hung up our harps. For it was there that they asked us, our captors, for songs, our oppressors, for joy. “Sing to us,” they said, “one of Zion’s songs.” O how could we sing the song of the Lord on alien soil? If I forget you, Jerusalem, let my right hand wither! O let my tongue cleave to my mouth if I remember you not, if I prize not Jerusalem above all my joys!

Think about the pathos contained in those last two sentences. It’s like saying: I’d sooner lose a limb than give up my faith. I’d rather not say anything, and even lose the capacity of speech altogether, than leave the Church. Its literal meaning, Pope Benedict XVI explained, “evokes the tragedy lived by the Jewish people during the destruction of Jerusalem…and their subsequent and consequent exile in Babylon. We have before us a national hymn of sorrow, marked by a curt nostalgia for what has been lost.” These verses, he said, are “pervaded by the loving memory of Zion, the city lost but still alive in the exiles’ hearts.” The Psalmist refuses to forget his true identity and longs to return to that place where he can be in the presence of God, worshiping him. Until then, however, it is unthinkable to give in to the request of the Babylonians: Zion’s songs are not cheap ballads to be performed on demand, they are intimate songs of worship and love.

Stretch out your hand

The Gospel we’ll hear at Mass on the 7th of this month (Lk 6:6-11) is a striking complement to that Psalm. Jesus entered the synagogue to teach, we are told, and there was a man there whose right hand was withered. The ailment can hardly be without significance. The way I see it, the man embodies what our life is apart from Christ. As if held captive by a tyrannical ruler, we labor under the oppression of sin and in a state of exile from our heavenly Father. Sin even threatens to make us forget our true identity: citizens of heaven and heirs to the Kingdom of God.

The Pharisees were watching, ready to accuse Jesus of breaking the law. But the Lord reads hearts; he knew what they were thinking before they’d said a word. In fact, we can be sure that our divine Lord, in the plenitude of his knowledge, had foreseen and planned the whole ­encounter from the beginning.

Come up and stand before us, the Lord said to the man with the withered hand. And he rose and stood there. Then Jesus said to them, “I ask you, is it lawful to do good on the sabbath rather than to do evil, to save life rather than to destroy it?” Looking around at them all, he then said to him, “Stretch out your hand.” He did so and his hand was restored. Thus, the Lord cured the man, rebuked the self-righteous legalism of the Pharisees, and provided a compelling picture of what he achieves in our lives. Jesus enables us to stand in the presence of God, offering true and pleasing worship.

He practices what he preaches

By way of conclusion, consider a couple of other passages. First, when the leper comes to Jesus and begs to be healed (related in Mt 8, Mk 1, and Lk 5), Jesus himself stretches out his hand, touches him, and says, I do will it. Be made clean. Later, when the disciples are on the storm-tossed sea, they are terrified and do not recognize Jesus walking on the water. Peter demands to be able to walk on water himself as proof, but in his fright loses confidence and begins to sink. But immediately Jesus stretched out his hand and caught him (Mt 14:31). In other words, Jesus does the very thing he told the man in the synagogue to do.

We need not fear stretching out our hands to Jesus. When we do, he will stretch out his healing hands to save us. We stretch out our hand to the Lord when we seek his mercy in confession, when we kneel before him in prayer, when we offer our lives in union with the sacrifice of the Mass and receive Holy Communion.

Pope Francis once offered a simple prayer we could make our own this month: “Stretch out your hand to us, Lord, and take hold of us. Help us to love as you love.”

IS THAT IN THE BIBLE?